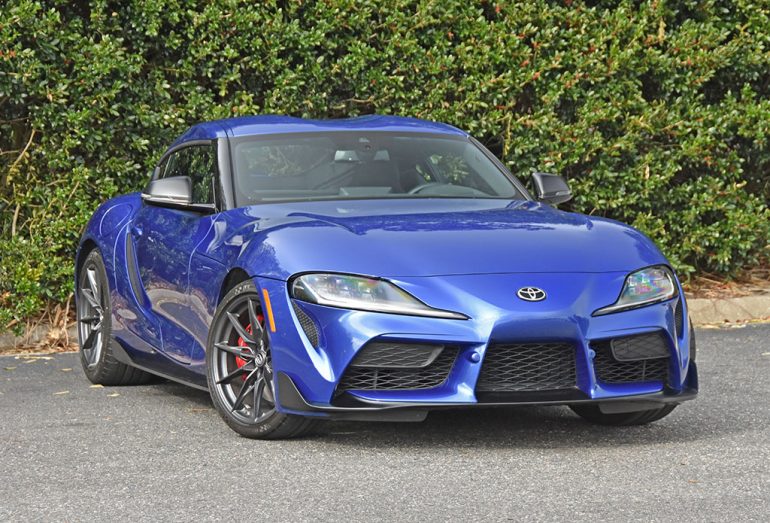 The fifth-generation Toyota Supra has been an acquired taste for some automotive enthusiasts considering its heavy BMW underpinnings mixed with Toyota style. However, in the full scheme of fun rear-wheel-drive sports cars the new Supra has gained notoriety in all the right places winning over the hearts of many younger enthusiasts, which is a good thing for the Toyota brand. For the 2023 model year things get very interesting, and FUN, with the addition of a 6-speed manual transmission option that I had the chance to check out this week with a growing smile on my face.

I’ve always praised the new Toyota Supra since my first run with the two-seater RWD (rear-wheel-drive) sports car when it was first introduced as a 2020 model. Having the inspired drivetrain that comes from BMW and chassis workings of the BMW Z4, the new Supra adds a new flavor to bring a rather rigid coupe structure that’s adorned with Toyota “styling” inspired by the FT-1 concept car of many years ago. 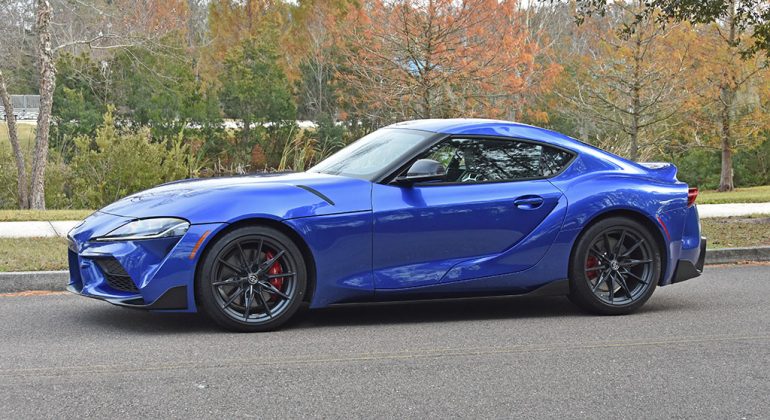 In getting a 6-speed manual transmission, something I never saw coming for the 5th gen Supra, there’s a new enthusiast base that’s now raising their eyebrows – and for a good reason after I have my week-long fun in this unique sports car. 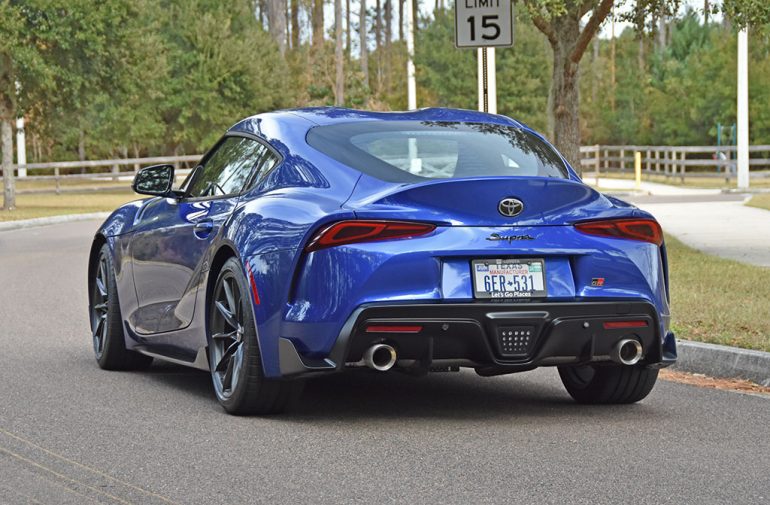 Sporting 382 horsepower and 368 lb-ft of torque from a 3.0-liter inline 6-cylinder turbocharged engine the Supra feels like it has much more power than what’s stated on paper. Such a notion isn’t all that uncommon for BMW vehicles, and in the Supra my butt dyno tells me there’s north of 400 horsepower sent through a somewhat light flywheel that’s nicely matched to this new 6-speed transmission and somewhat long-travel clutch pedal. 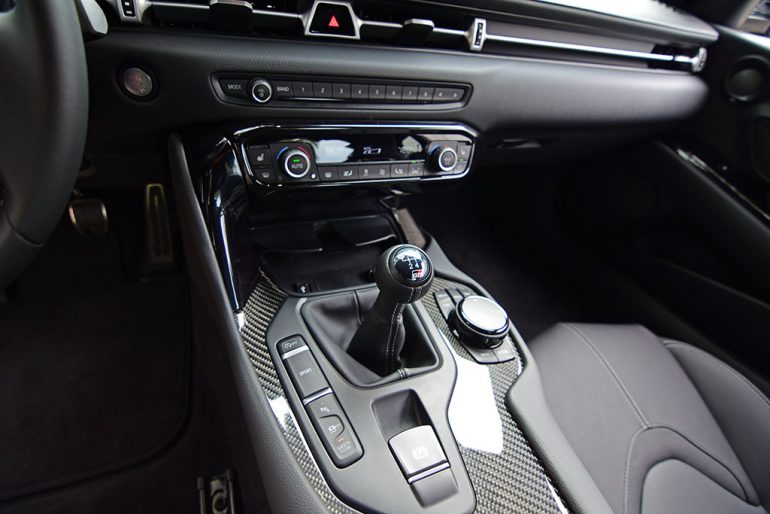 The driving dynamics of the Supra are about the same of what I’ve experienced in the automatic transmission variations, but I’m told there’s some retuning to handle all of the drivetrain drama that comes with shifting a manual transmission, mainly with the stability and traction control. The suspension system with its adaptive dampers feels a bit too soft for my taste in that the body tends to lift quite a bit under heavy acceleration and hard shifts where you slip the clutch. The shifter feels more notchy than older BMW manuals and lacks the older rubbery feel, which is all a good thing in my view. While it’s nothing like the delightful TREMEC 6-speed in my Shelby GT350, the Supra’s transmission feels proper, and the intelligent Manual Transmission programming (iMT) system provides precisely rev-matched down-shifts and even those up-shifts when you may take a while to land the next gear. With the iMT system you can be a bit lazier with your downshifts never learning how to heal tow. There’s also the added benefit of a quick restart system if you ever stall out just press in the clutch and like magic the engine comes back to life.

There’s a lot to like and enjoy in rowing your own gears in the new Supra, in addition to the manual adding a newfound fun factor to such a vehicle that’s quite rare in today’s automotive landscape that’s bound to move to Electric Vehicles. Lastly, there’s the fact that the Supra is still a quick car, in fact, the Supra is downright fast out the box and awaits tuners to get ahold of the manual transmission version and do some interesting things that may pay a bit of homage to the marvel that the fourth generation Supra was – and still is for those lucky enough to own one. 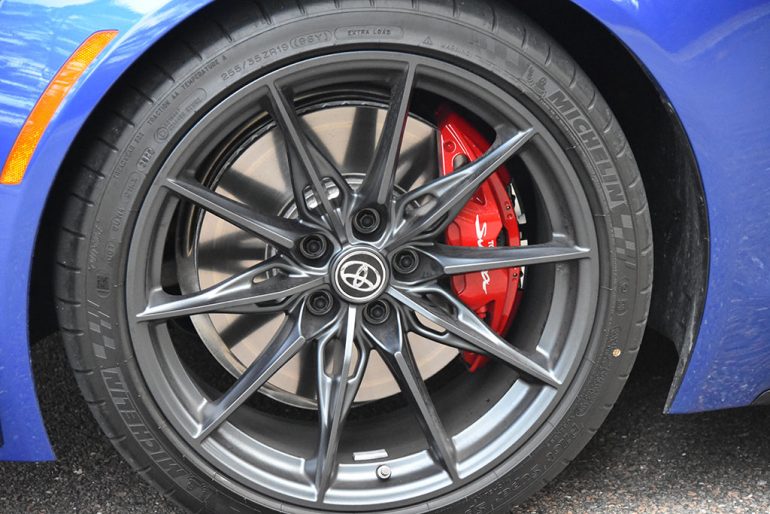 Zero to 60 mph time is about 4 seconds in the manual Supra, which isn’t far off from its automatic counterpart thanks to the 6-speed manual having the proper ratio for you to hit just over 60 mph in second gear. That means a quick one-two shift and you’re there, beating your buddies in the new Nissan Z!

Fuel economy is mostly expected in the new Supra, and the manual transmission lowers the MPG rating slightly over the automatic, which isn’t’ all that surprising in having two less gears to work with. EPA estimates for the 2023 Toyota Supra Manual Transmission come in at 19 mpg city, 27 mpg highway, and 21 mpg combined. I was able to get slightly better than those figures when I wasn’t pushing the Supra hard and having the all the fun that comes with driving a relatively high horsepower manual-transmission RWD sports car that weighs 3,400 pounds. 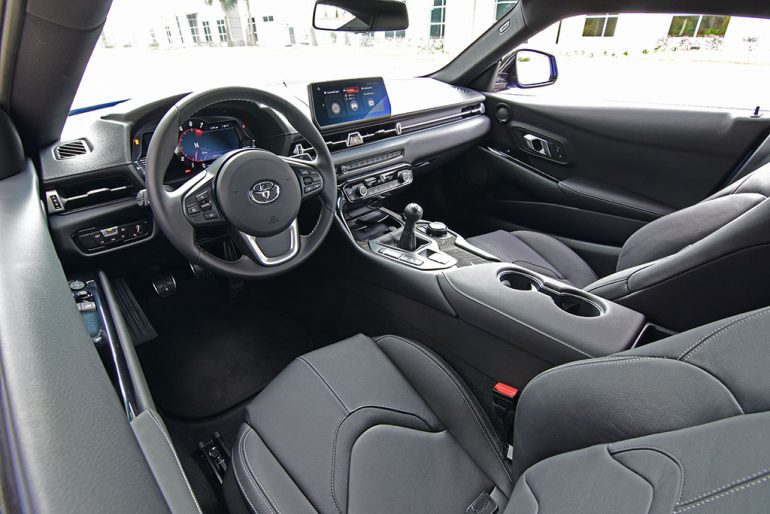 The 2023 Toyota Supra mostly remains the same, of course with the obvious change in having a manual transmission option and a special A91-MT (manual transmission only) edition limited to just 500 units that features unique interior appointments and a few special exterior bits. Inside you’ll still find a small cabin but heated leather seats that are surprisingly comfy considering they don’t look the part. Additionally, the Supra has a forgiving bubbled-up roof area above the seats that provide additional headroom for taller folks like myself at well over six feet tall. That bubble area also allows you to wear a helmet for those times that you want to embarrass your Nissan Z friends again, but on the track. 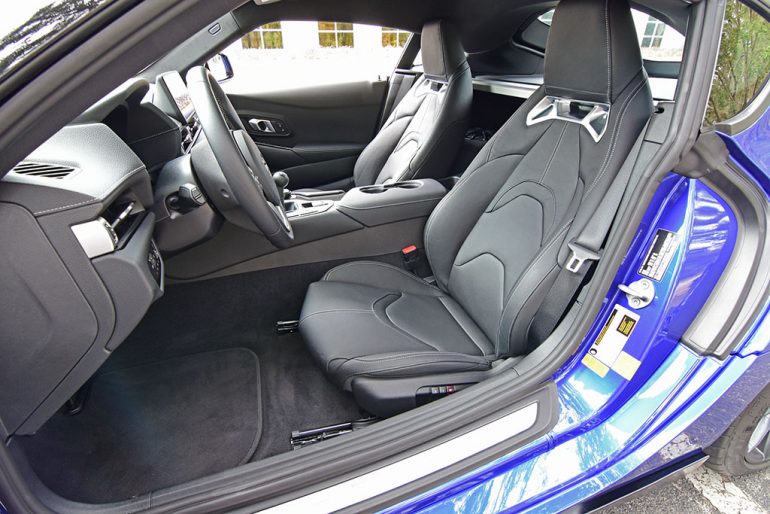 Other aspects of the new Supra that make it appealing with a premium feel is the heavy use of BMW parts and electronics, including the 8.8-inch touchscreen infotainment unit that also uses the customary BMW iDrive controls. The system is now standard across the board for the new Supra and retain its snappy-quick response interface and a few customization options, with wireless Apple CarPlay and Android Auto integration. One of the headscratchers for me remains to be the digital gauge cluster that seems to have a lot of wasted screen real estate but proves to be unique for the Supra. 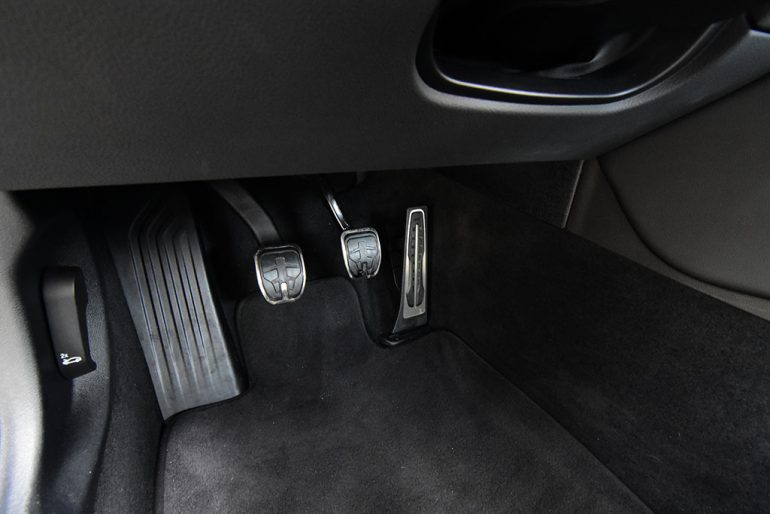 I won’t deny that the new Toyota Supra has grown on me in just the few years that it’s been out. However, having a manual transmission option at no additional cost makes things very intriguing and will certainly gain the attention of more enthusiasts. Now, if Toyota could only work out that annoying and nearly painful wind buffeting issue that occurs when you roll down the windows and drive at speed. Here, again, Toyota, simple wind deflectors at the rearview mirrors would solve this – it’s not exactly rocket science – it would make the cost of my test vehicle at $57,940 even more attractive.