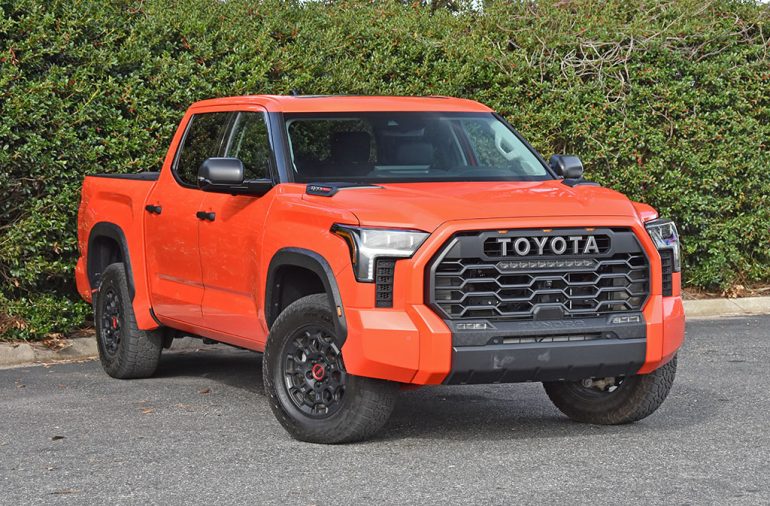 The third-generation Toyota Tundra has so far impressed me with all that it has to offer in various trim levels that I’ve had the chance to experience. One particular trim that I get my hands on this week, the Tundra TRD Pro, furthers the notion in my mind that Toyota is better positioned to be more competitive in the vast truck landscape where the brand’s unsurpassed reliability continues to be one of its major selling points.

The new Toyota Tundra was already somewhat of a controversial proposition for some that surrounded the new powertrain choice that does away with the old V8 and uses a new twin-turbo V6. That new engine can also be coupled with a hybrid system in the upper trim levels, including the new Tundra TRD Pro. In fact, the new Tundra can be equipped with the i-FORCE Max hybrid powertrain starting in the Limited trim but comes standard on the TRD Pro, and luxurious Capstone trim. 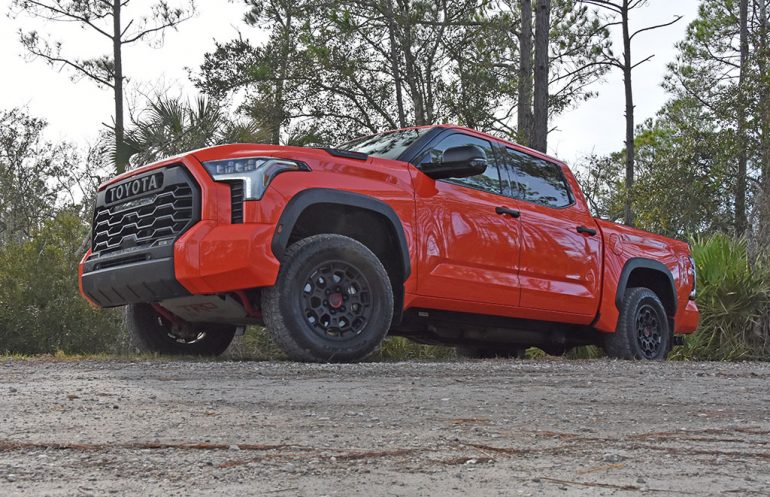 Taking all that I’ve experienced in my previous reviews of the third-generation Toyota Tundra and elevating that character where it’s more applicable to off-roading, and added ruggedness is the TRD Pro trim in a nutshell. There’s a lot to digest in the modifications from the TRD (Toyota Racing Development) parts bin that’s all been customized for the new Tundra in a unique way to accentuate the V6 hybrid powertrain and the Tundra’s true capabilities. For starters, the unique TRD exhaust does its best to give you a menacing sound but as we know, tuning a V6 to sound “good” is a challenge. Here TRD seems to have done its best where the twin-turbo V6, when it fires up after the battery and hybrid motor does its initial dance, has a neat rumble as a reminder that it has some real substance under the hood. That substance is 437 horsepower and 583 lb-ft of torque, which feels substantial with a lot of low-end grunt. From a standstill, the Tundra TRD Pro will hit 60 mph in about 5.7 seconds, which is pretty good for such a truck. 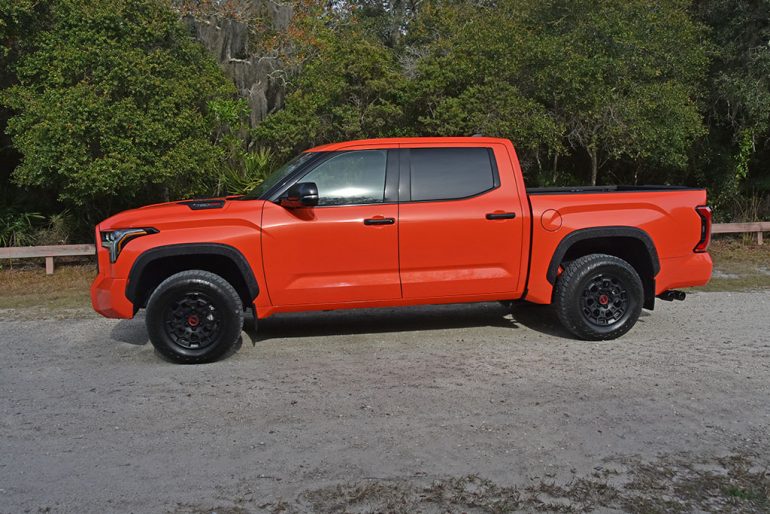 Power from the Tundra TRD Pro’s hybrid setup is sent through a 10-speed automatic transmission out to either the rear wheels or all four by a four-high setting or a four-low setting that can be coupled with the Crawl Control system to automatically modulate the throttle and brakes via five low-speed settings. Just know the 4-high setting cannot be used on the pavement, and there still isn’t the option for a 4-high automatic. The capabilities of the Tundra TRD Pro are also extended through the Multi-Terrain Select drive mode system to dial in your terrain from the modes of Mud, Sand, Rock, or an Automatic mode leaving the computer to sort traction out. There’s also an electronically locking rear differential and the ability to tow up to 11,175 pounds. 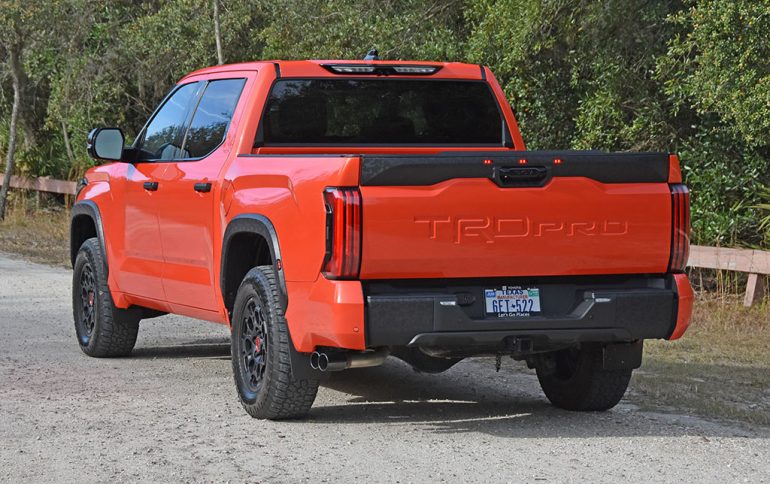 When conquering challenging terrain, the Tundra TRD Pro’s suspension that has a front-end lift of about 1.1-inches over other setups, features FOX shocks with 2.5-inch internal bypass reservoirs coupled with an aluminum TRD front skidplate, underbody protection, anti-roll bar, and the 18-inch TRD forged aluminum wheels sourced from BBS wrapped with all-terrain tires. 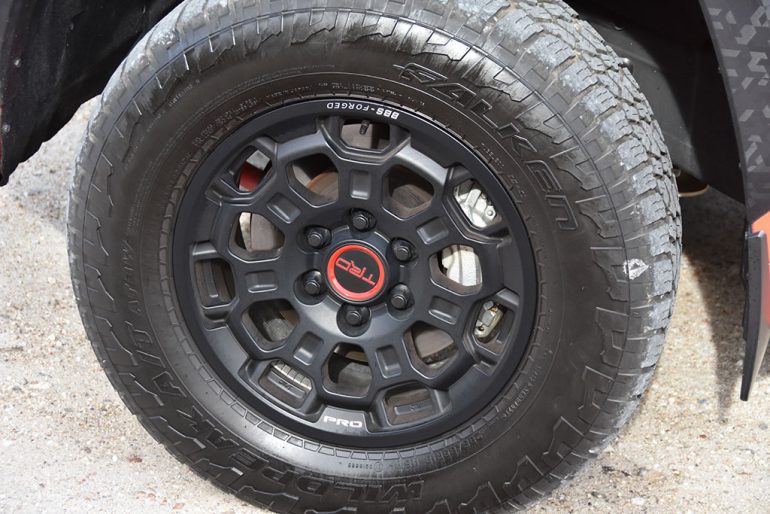 The Tundra TRD Pro may not be nearly as serious as the Ford F-150 Raptor in many eyes, but it holds its own and has a few tricks, such as having significantly better fuel efficiency (18 mpg city, 20 mpg highway, 19 mpg combined), a unique eye-popping look from its digital camo-styled wheel well trim and Solar Octane ‘orange’ paint, and Toyota’s historical reliability that you hope finds its way to the new Tundra.

Deep into the capabilities of the new Tundra TRD Pro there are some areas that could use some improvements, such as the overall ride quality where the Tundra felt a bit jigglier on the road than I would like considering it has large off-roading tires and the trick suspension setup. However, the Tundra TRD Pro did do well for highway cruising, just when you slow things down the body tends to get a little jittery going over road imperfections. Tackling off-roading trails, things seem at home and there’s not much to complain about for how the Tundra TRD Pro feels and performs. 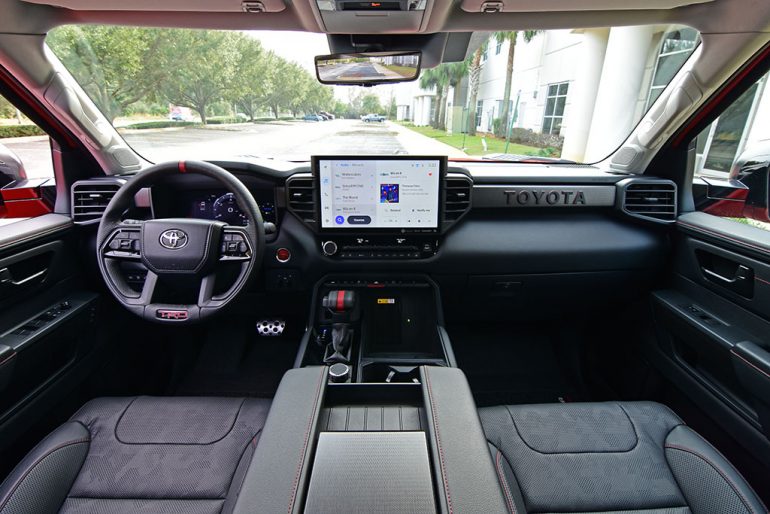 The large and open interior of the new Tundra TRD Pro is much of what you find in the previous trims that I’ve reviewed of the Tundra, apart from the TRD Pro having unique seat patterns with TRD Pro logos embroidered, accent stitching, a customized steering wheel and shifter with a red stripe, and TRD Pro all-weather floor mats. There’s also a welcoming feel and operation to the simplistic switch gear throughout the dashboard, including the rather simplified 14-inch infotainment system. The large touchscreen infotainment is unique and easy to use but I find there could have been more integration with features and the ability to display more core functions at once with so much screen real estate. Wireless Apple CarPlay and Android Auto integration work seamlessly. 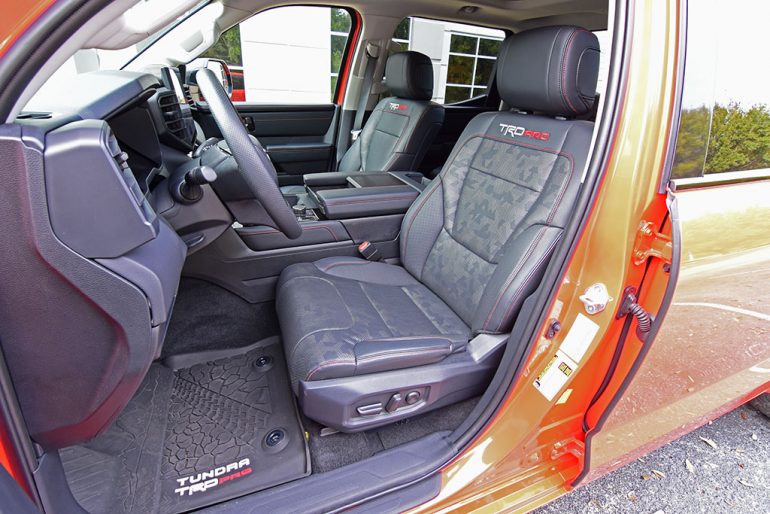 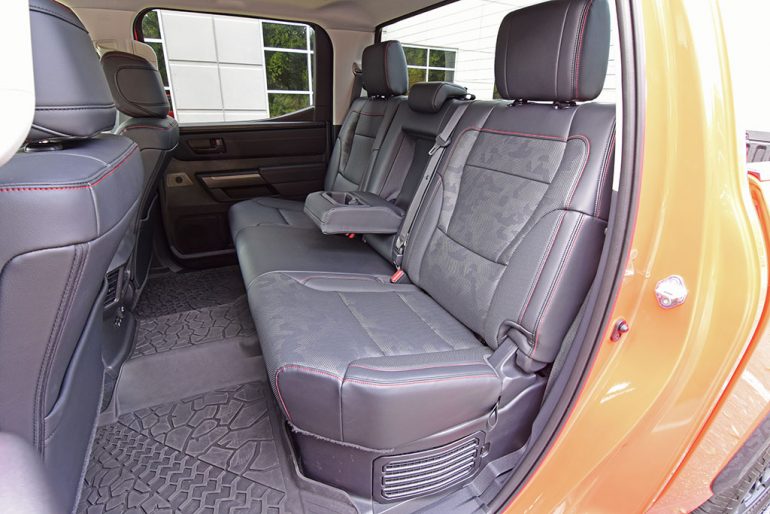 Some may have raised an eyebrow or two at the new Toyota Tundra’s pricing scale. However, with all that you get in the Tundra TRD Pro trim there’s a value proposition that is seen when you start to compare the Tundra TRD Pro to its competition considering my test vehicle comes in just under $70,000 at the as-tested price of $69,985. That’s just over $10,000 less than the GMC Sierra 1500 AT4X that I reviewed a few weeks ago! I believe Toyota has something special in the new Tundra TRD Pro, looking at the collective all that you get in such a package.